Choosing between the two countries comes down to your evaluation and preference. While Switzerland offers a higher work-life balance and perks, the US provides more growth opportunities and is more diverse. Check out our dedicated article on the cost of living in Switzerland.

Is it cheaper to live in Switzerland or USA?

Nationwide, living in Switzerland is more expensive than in the US. However, some US cities have similar to Switzerland prices. For example, the cost of living in New York is almost the same as in Zurich.

Switzerland ranked top among the most expensive countries in the world in 2022, while the US is also known to be a pricey place to live in.

A single person living in the US can live comfortably with a gross income of $2,100, while she/he will need $2,500 to afford a similar lifestyle in Switzerland.

Living in Switzerland as an American is something you might need to adjust to. Read on how.

Here is an example of typical monthly expenses for a single and a family of four in Switzerland:

An example, of how much you need to live in the US depending on the size of a household.

Below is a comparative table showing the varying living costs in the two countries:

To properly grasp the variance in the cost of living between these two countries, you need to compare prices of common human expenses. Some of these include:

Read how much a family needs to live in the US vs in Switzerland.

Rent prices are higher in most Switzerland Cantons than in USA cities. The rent in Switzerland falls between $900 and $4,000. When comparing all apartment sites, the national average rent is $1,373 per month. The average price of rent per square meter is $15,90; see more in the table below:

The cheapest Swiss cantons for renting are:

In the US, rent prices have seen a steady rise in the last few years, as seen in the graph below:

The rent you pay in either country will be determined by the city you choose to settle in. For instance, in Switzerland, cities with the highest rent are Zurich, Bern, and Geneva, while in the US, New York, San Francisco CA, San Jose CA, and Boston top the list.

As an expat looking to pay minimal rent in Switzerland,  you can choose to settle in Jura or Wallis. In the US, you could settle in Wichita, Kansas, where the average monthly rent for an apartment is $580.

Prices of food in Switzerland are higher than those in the US. A single person in Swiss spends between $20 and $60 daily on food which translates to around $700 monthly.

Eating out in Switzerland is pricey, especially if you’re looking for a modest restaurant. You’ll spend approximately $25 on lunch and $40 for dinner, including drinks which are quite expensive.

A family of three spends $1,100 monthly on food in Switzerland, and this includes the cost of buying groceries and occasionally eating out. In the US, the same family will spend between $800 and $900.

Below are the prices of common food in the two countries:

In both countries, eating out proves to be more expensive, but nothing can beat Switzerland. So if you’re looking to save some money on food, get the groceries and cook at home. Nonetheless, you will keep more money in the US and especially when shopping in bulk.

Read more on food and groceries prices in Switzerland.

In Switzerland, the transport system is extremely well-developed, including trains, buses, boats, trams, and cable cars. You can go anywhere by public transport, even to the smallest villages. Yet, transportation costs a lot.

If you commute a lot in Swiss, then you’ll make some savings if you go for the rail pass, which includes some free bus tickets saving you some money.

You’ll need to purchase the tickets before you travel as some buses don’t have on-board ticketing.

Overall, transport doesn’t come cheap in Switzerland. For instance, a one-way ticket pass in Zurich goes for $4, while a two-way pass in Tageskarte costs $8.5. An annual pass costs $3,860.

If you are considering buying and owning a car in Switzerland, read this guide on how much it costs.

That said, the average cost of owning, running, and using a car in Switzerland will be between $300 and $500 per month.

Zurich taxi fares are expensive as they charge approximately $4 per mile. You’ll have to pay more if there’s a traffic jam. For instance, a delay in a traffic jam for five minutes could escalate the cost to $7.

Transport in the US is relatively cheaper compared to Switzerland. On average, a single person in the US spends between $400 and $1,000 monthly on transportation.

Public transport is cheaper in metro areas than taxis, and having your car as the cost of gas has escalated in the last few years.

Healthcare insurance coverage is compulsory for everyone residing in Switzerland. The system includes a public, subsidized private, and purely private structure.

An adult in Switzerland spends between $4,000 and $7,000 annually on health insurance to cover premiums and the minimum deductible amount.

Healthcare in the US is also expensive. In 2020, for instance, the annual spending on healthcare hit the $4 trillion mark, which means that individuals spent more than $10,000 annually on healthcare.

Since 2018, it has been mandatory for every individual to have health insurance coverage or face penalties. The affordable care act allows subsidies for low-income earners and permits parents to include children aged up to 26 years in the cover.

Read this article about the cost of health insurance in Switzerland.

If you’re moving with your family, which includes children, you’ll need to evaluate the cost of education in the country.

Public education is free in Switzerland unless you choose to have your children attend private or international schools.

As the children progress to universities, Switzerland offers competitive tuition rates compared to the US, as seen below: 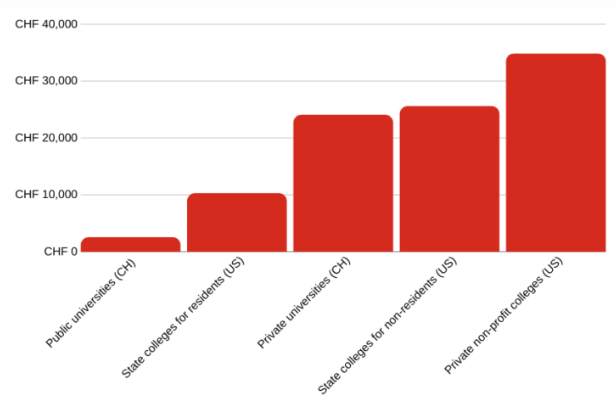 Cost of living in Switzerland vs New York

Over the years, New York has consistently ranked as the best city in the US, while Zurich also ranks highly as the most favorable in Switzerland.

To understand the difference in the cost of living in Switzerland and the US, let’s compare the two cities. On some aspects, such as rent, New York is more expensive, while on others, like groceries, it’s cheaper.

Below is a comparative analysis of the two cities:

Housing in New York is expensive compared to Zurich. The high cost is driven by the increased demand for housing in the city, which doesn’t match the supply. Empty land in New York is hard to come by, making the housing situation worse.

New York has a vibrant job market, and the economy in the city is mainly on a boom that keeps attracting more people to the city.

Here’s a breakdown of how rent prices compare in the two cities:

The cost of living in either of these cities will be determined by the size of your family and your lifestyle. While a single person can comfortably live in a one-room in the city’s outskirts, an average family will need a two or three-bedroom house which is more expensive.

Overall, the cost of living in New York is higher than in Zurich due to the high rent prices.

How much money do you need to live comfortably in Switzerland?

A single person living in Switzerland should earn between $4,000 and $6,000 to live comfortably. A family of four will need approximately $8,000 to have an easy life but not extravagantly.

The city you settle in will highly affect the quality of life you can afford. In the major cities within the country, rent takes a big chunk of your income.

Assuming you earn a net salary of $4,000 in Zurich, here’s how you’d have to breakdown your income:

The assumption is that you are a single person who resides within the city center. This means you’re close to your workplace, so you don’t have to incur recurrent transport costs.

Luckily when living in Switzerland, the pay in different fields is attractive, so you’ll be able to afford the high cost of living.

The country doesn’t have a set-out nationwide minimum wage; however, different cantons in the country have since passed their minimum wage rate law. For instance, in 2021, Geneva set the rate at $23.61, considered the highest rate in Europe.

Check out our guide on Swiss salaries.

You can not live in Germany without health insurance, as a human not, yet taking out a policy for a dog is optional. Pet health insurance comes in handy when your furry friend needs the help of the...