An increase in rent prices in Germany has led to soaring demand for owning properties. More people are coming out to evaluate their ability to own a home or venture into the real estate market. The gap in housing creates a constant demand for properties and so the increase in home prices.

Some of the cheapest regions and cities to buy a property in Germany include:

Owning a house in Germany is a noble investment considering the gap between the high demand and low housing supply that has been consistent in the German real estate market. This article explores the cheapest places in the country where you can buy a property and what makes the area attractive for investors. Don’t miss our article about the best places to buy a home in Germany.

Where is the cheapest place to buy a house in Germany?

The cheapest place to buy a house in Germany may vary depending on several aspects. Some cities have their house prices through the roof. For instance, when looking for cheap and affordable properties, Munich and Frankfurt aren’t among those since homes in these areas are expensive.

Read more about house prices in Germany in our guide.

House prices in Germany have been rising over the years, with a 12% increase as of March 2022. Below is a graph showing the growth trend over the last three years.

Regions with cheaper real estate prices where someone earning average income can afford include:

Here are median prices per square meter for different types of properties among all German states:

Most of these areas fall within rural Germany as prices seem less competitive than in big cities.

Some regions within the big cities in Germany also offer relatively cheap houses where one can qualify for a mortgage even as an average earner. These areas include:

Extensively the regions in Germany where house prices are relatively low for a property measuring between 60 and 80 meters squared include:

Being among the populated regions in Germany, Saxony has relatively affordable home prices. For example, in 2021 price per square meter in the region was going for 1,500 EUR, which is considered very reasonable.

Owning a house or apartment in Saxony would guarantee good returns in the long run if you intend to rent it out, as the rent prices have consistently adjusted upwards in the last couple of years, given the low number of new constructions in the region.

The price range applies in the extensive Saxony region including cities such as:

These areas are all populous, meaning buying a house here won’t leave you feeling like you are in the middle of nowhere.

Nonetheless, buying real estate in Saxony involves some risks too. The population growth is lower than in other German regions; many people move out. This makes it more challenging to rent out your future home.

Rhineland is Germany’s seventh most populous state and borders three countries, including Belgium, France, and Luxembourg.

Where a state is located within the country is critical as the different regions have varying price ranges.

Cities in Rhineland include:

Although the state has extensive forest coverage, housing prices are affordable compared to other regions in the country that are less populous but have expensive house prices.

Saxony-Anhalt is an Eastern Central state neighboring Saxony, Thuringia, and Lower Saxony. Although it’s a vast state, it has a low population of around two million citizens, with approximately a hundred thousand being foreigners.

The home value in the region is cheap compared to the surrounding states such as Brandenburg.

These prices apply to the wide area of Saxony-Anhalt, including:

Due to its rich cultural heritage owning a property in Saxony-Anhalt is noble as the region contours its trajectory trend economically and in population, which are the two main aspects to consider when acquiring real estate.

Don’t forget to check out this guide on best places to buy a house or apartment in Germany.

Cheapest cities to buy a house in Germany

The pricing of housing in Germany involves many factors. Hence, to understand the value of the real estate, you need to compare all the aspects that contribute to the final price. Some of the critical elements that affect house prices in different parts of Germany include:

For example, properties cost the most in the most economically prosperous city in Germany – Munich.

When comparing different houses, the size is vital as it influences the home price in other regions of the country.

According to the Global Property Guide, different sizes and ages of the houses responded differently to the prevailing market trends in 2021 before inflation adjustments. For instance:

If you intend to rent out your property, you need to evaluate how fast you would be able to recover the principal amount and start making earnings on the same.

Below we look at the real estate prices across different towns in Germany and the prevailing rent rates to help you evaluate the viability of the idea of renting it out.

Among the places that offer cheap prices for existing houses include:

The city is located in Baden-Wurttemberg in the South West part of the country. It’s known for jewelry and watchmaking as major activities leading to the Golden City nickname.

Pforzheim’s average salary rate stood at 1,835 EUR net in 2021, with most of the population working in the industrial, tourism, information technology, and finance sectors. Below is a look at salaries in the different fields.

The city is located in Rhineland-palatinate in the Southwest part of Germany. Population in the city stood at 96,900 by the end of 2021.

If you plan on renting out the house, here’s a breakdown of the rent prices within this area

Rental housing in the city is always in high demand as it’s a safe region, so people are always shifting to the area. 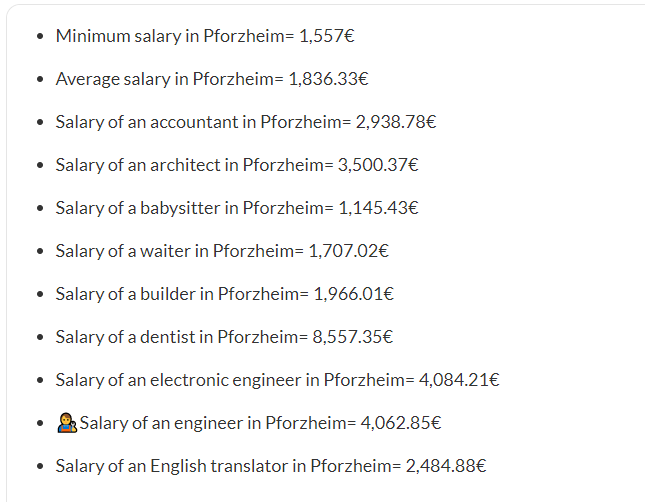 The average cost of living in the city is 1,350 EUR, which is considered affordable compared to the average salaries offered in the region. Furthermore, Kaiserslautern has well-established big hospitals that offer many potential jobs.

Yet, the city isn’t populous; people who love quiet and ambiance are always looking for properties to rent.

The city’s salary average at 1,700 EUR, while the minimum salary rates for most workers fall at the 1,500 EUR mark. This makes it possible for most people to live above the average mark as they are well remunerated.

Lüneburg is a town in Lower Saxony in the North- Central part of Germany.  The city is home to approximately 77,000 people as of 2021.

The town is a powerhouse when it comes to salt production in entire Northern Europe. This helped the town’s rapid growth, making it a regional trade hub.

Its proximity to Hamburg has also contributed to the town’s rapid growth. Besides, house prices in Lüneburg are low considering its ideal location, the town’s growth rate, and thriving economy.

Owning a property to rent out in the town is a good idea as the rates are friendly, which means you’ll recoup your money fast.

In the city center, a one-bedroom apartment measuring 40 m² rents for around 700 EUR while a three-bedroom measuring 80 m² rents at 1,500 EUR.

As you move out of the town center to the suburbs, the rent prices fall to 500 EUR for a one bedroom and 1,200 EUR for a three-bedroom.

Workers living and working in Lüneburg earn an average salary of 2,500 EUR after tax which is considered a good figure as the cost of living in the city is around 1,000 EUR for a single. This means a person earning the average salary can afford rent and pay for other utilities comfortably.

The city in the Saxony state in Germany has a large population that stood slightly above the 600,000 mark in 2021.

Demand for housing has always been high in the city as more people shift to the area. This has resulted from the city’s vibrant economy as more industries and businesses are set up.

The common economic activities in the region fall under the energy sector and the automotive, the two primary industries in the area. The tourism industry is also on a trajectory trend as more people visit the city to experience the rich cultural heritage showcased in the museums and art galleries through art and graphics.

Education is also key in the region as it hosts some of the oldest institutions, such as the University of Leipzig, which dates back to 1409.

Property prices in Leipzig are considered affordable, given that an apartment measuring around 70m² costs approximately 110,000 EUR. This is cheap compared to other cities in the country where the same size goes for over 300,000 EUR.

Rent prices in Leipzig have been steadily increasing; on average, the price stands at 9 EUR/m² for an apartment measuring 30m². A unit measuring 60m² rents at 8 EUR/m².

The cost of living in the city is considered lower than in other cities in the country. With an income of 1,000 EUR, you can afford a decent life in the city, paying all your bills and even saving some.

link to Types of Ausbildung (Apprentenship) in Germany: Guide

There are many situations in life when you might consider getting a loan. Borrowing money from the bank isn't always the best solution, but it's the preference of many Dutch when they don't have...