Buying a car in the Netherlands as a foreigner is not as difficult as one might think. In fact, with a little bit of research and preparation, the process can be relatively straightforward. Of course, there are a few things to keep in mind, such as taxes and regulations, but overall the process is not overly complicated.

A foreigner can buy a car in the Netherlands as long as they have:

Understandably, the process can sometimes be a little daunting, but with the right help and guidance, it can be easily navigated. This article will provide an overview of the process and some helpful tips to make the experience as smooth as possible. Want to buy an affordable car in the Netherlands? Check out our guide on the cheapest cars in the Dutch market.

Can you buy a car in the Netherlands as a foreigner?

In a nutshell, the process of owning a car in the country includes:

Buying a car in the Netherlands as a non-resident

As a foreigner, you need to evaluate the benefits of each option and compare it with the regulations of your country if you plan on taking the car to your home country in the future.

Buying a second-hand car has the benefits of being more affordable. Depending on the model and technical well-being, you can get a second-hand vehicle retailing between €5,000 and €20,000.

A new car in the Netherlands is more pricey, mainly because you are supposed to clear a one-off payment known as the private vehicle and motorcycle cost. The rate for this cost varies based on the amount of carbon dioxide it emits to the environment. A higher emission rate attracts a high price.

See more on car prices in the Netherlands.

Buying a new or used car will be influenced by your preference, funds available, and your future plans for the vehicle. Do you intend to sell it later or ship it to your country?

Check out the best websites to buy a used car in the Netherlands.

This aspect is purely personal and will be influenced by your financial plans. You need to answer the question of how much you are in a position to spend on a car at the moment.

If you don’t have enough cash at the moment, you can get financing from a bank or negotiate a friendly deal with car dealerships. Some dealerships in the country allow adjustments in the pricing and payment, which you could take advantage of.

Registering a car in Dutch as a foreigner is a straightforward procedure that shouldn’t scare you. However, here are the main requirements you need to meet:

Registering the car with the foreign driving license

If you don’t have a Dutch driver’s license or required identification documents, you can use the following for the registration:

If you don’t have a BSN number on the passport or identity card, an extract from the Personal Records Database (BRP) is additionally required. You must request this extract from the municipality.

Generally, car registration in the Netherlands involves the following steps:

You’ll get a registration card when registering a car in the Netherlands. The card will have the vehicle’s details, such as weight and the current license plate holder.

You’ll also receive a nine-digit code which will come in handy in the future if you decide to sell the car. If you lose the code, you can apply for a new one online.

You have three options where you can register your car: the RDW counters, in the post office under the vehicle registration sections, and in selected car companies that belong to the Kentekenloket BV.

The critical aspect of registering a car in the Netherlands is verifying your identity by the authorities.

In the Netherlands, you’ll be expected to clear the motor vehicle taxes you’ll receive from the country’s authorities.

The amount in taxes charged on your car will depend on the type of car, fuel, and the taxes applicable to the region in the country.

Taxes chargeable on a vehicle in the country include the BPM tax, a one-off rate paid by the car’s first owner. This means if you’re buying a second-hand car, this won’t apply. You’ll also pay road tax, payable annually or every three months.

The amount of tax you pay on a car is also influenced by the rate of CO2 emissions it releases to the environment.

You could also opt to have a comprehensive cover that will be more elaborate and cover various risks such as theft, damage by weather, fire, or animals. The risks covered under the comprehensive insurance option will depend on the policy and the risk factors you consider highly probable.

The amount you pay in insurance charges varies for the different providers. On average, however, the amount payable for a third-party cover is €75.

Motor vehicle Insurance is a must-have in the country, so you need to evaluate and organize it in time once you register the car.

Choose the right car insurance in the Netherlands

Compare car insurance deals in the Netherlands by using this online calculator. United Consumers compares the best and most affordable car insurance policies among the top providers, e.g., Allianz, ASR, Avero, National Netherlands, and others.

However, car insurance from Allianz will give you enough coverage at an affordable price.

Instead of buying a car in the Netherlands, you can also lease one. In many instances, it’s a better solution.

What do you need to buy a car in the Netherlands?

When buying a car in the Netherlands, your aim is to have a seamless process that takes minimal time. This is only doable if you have all that is needed for the purchase.

As a foreigner, you’ll need first to prove your identity. Buying and registering the car will be easy if you have a Dutch ID.

Without the ID, the first step will be to get your digital registration (DiGiD) and citizen service number (BSN) ready. Having these in good time will lower the duration you spend in the RDW offices to register your car.

Once you have that, the next step is to visit the RDW offices, where you’ll need to carry these documents for verification, inspection, and approval:

Once you avail these to the RDW offices, the rest is settling the payments due, including taxes and insurance, and you’re good to go.

Best car to buy in the Netherlands

The best car to buy in the Netherlands will be influenced by several factors that include:

The Netherlands is keen on environmental pollution, so the best car would be one with the least CO2 emissions. This will influence your choice of car in terms of size and the fuel used.

What is the cheapest car in the Netherlands?

Diesel-fueled vehicles still top the number of cars bought in the country, as seen below: 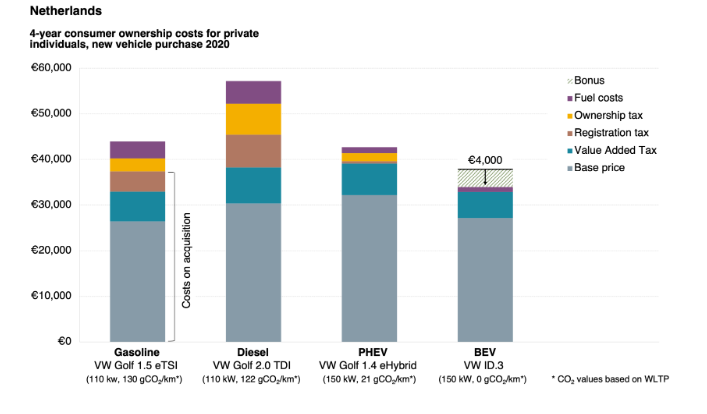 Read our guide about the cost of car ownership in the Netherlands.

In terms of brands, these were the leading cars bought in the Netherlands in 2021:

These are the top car models sold in the country in 2021.

Used car prices in the Netherlands

Used car prices vary based on brand, model, age, and mechanical condition. Below is a breakdown of the average used car prices in the Netherlands:

An essential factor you need to consider when buying a used car in the Netherlands is the periodic vehicle inspection which is done annually or biannually. You’ll need this report as it’s a legal requirement. The average cost of every assessment visit is between €20 and €80.

Additionally, a used car has a higher maintenance cost. Areas that need regular evaluation and repeat maintenance include the battery, tire replacement, and the vehicle’s charging unit.

link to Types of Ausbildung (Apprentenship) in Germany: Guide

There are many situations in life when you might consider getting a loan. Borrowing money from the bank isn't always the best solution, but it's the preference of many Dutch when they don't have...